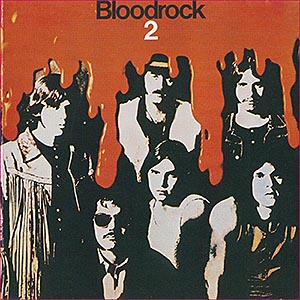 Year: October 1970 (CD 1995)
Label: Repertoire Records (Germany), REP 4335-WY
Style: Hard Rock
Country: Fort Worth, Texas, U.S. (1969–1975)
Time: 42:52
Format: Flac Tracks 16/44,1 kHz
Size: 279 Mb
Bah. Just when Bloodrock established themselves as a mighty grim band, with imagery of death and suffering and nasty angry riffs all around, they suddenly make a 180% turn and establish themselves as a happy shinin' Southern-hard rock band totally in the Grand Funk vein! What the heck, some of this stuff sounds even much more like Styx than GFR; don't you hear the shadow of Dennis DeYoung rising as the band happily coo 'Lucky in the m-o-o-o-o-o-orning!'
Yeah, yeah, I know, this is where you're gonna find 'D.O.A.', their eight-minute major epic and arguably their best-known song of all. It's about a guy dying after a plane crash or something and it's absolutely sickening - not because of the actual music, which, I gotta say, is pretty boring, but because of the totally sick lyrics. I hate that nasty gory stuff. As far as frightening epics go anyway, this is absolutely nothing compared to 'Sister Morphine' or even certain Black Sabbath numbers; it's long, it's monotonous - after the second verse, even the imposing opposition of the quiet organ-based verses and the pompous 'I remember!' chorus starts to feel more predictable than a baby's diaper - and it doesn't even have a good guitar solo. It's not entirely bad, though, mainly just overlong, and after all, the number of alcohol-related casulaties in 1971 did drop 14% after the release of the song. Yeah, just a curious tidbit I picked from the Bloodrock site. See, Bloodrock were saving the precious lives of American youth long before Lynyrd Skynyrd became the first geniuses to warn the world of the danger of drugs, handguns, racism and flying planes instead of riding trucks. Talk about originality.
Anyway, 'D.O.A.' is really an anomaly on the album. The other seven songs are just fast/mid-tempo funny rockers about all kinds of fancy posh crap. Maybe the record company were trying to model their pets along the lines of Mark Farner and his Christian thugs. Maybe they wanted to try that department themselves. The problem is, who the heck wants a happy Texan hard rock band? What the world needed was MORE EVIL ROCK! Instead, we get stupid sissy crap like 'Lucky In The Morning' and happy dinky voices chanting 'I couldn't live without you' on 'Cheater'. Or a pseudo-soulful ballad like 'Sable And Pearl', for no apparent reason interrupted at times by 'aggressive' bits of chaotic riffage and Rutledge screaming 'teach me how to love you' in his best impression of a paranoic which isn't really that good. They should have hired Ozzy Osbourne for that.
The good news is that the riffs, occasionally, are still good. Actually, they're always good; they're just used in a bad way. In the previous review, I rambled on about how hard it is to actually make a good riff; here, let me go on with this rambling some more and state how hard it is to actually match a good riff with a suitable atmosphere. These riffs should all be matched with angry moods and red-hot solos (preferrably cool lyrics too, but that's a bit too much to demand from a Texan redneck, I guess) - instead, they're all matched with a good-time atmosphere and TOTAL, I mean, ABSOLUTELY FRIGGIN' TOTAL inoffensiveness. They could have sung that stuff with Frank Sinatra for all I care.
I single out 'Cheater' as an interesting track; it's at least multi-part, and it occasionally works. I'm also slightly partial to the two rock'n'rolling numbers in the middle, 'Children's Heritage' and 'Dier Not A Lover', if only because they easily demonstrate how tight an outfit Bloodrock actually were - their six-pack unit rolls along like an unstoppable machine, which is not something I'd say of, well, Steppenwolf, for instance. Absolutely the best of the load, though, is 'Fancy Space Odyssey' that closes the album. I can't figure what the hell the song is about, except that the lyrics seem to be whiny and depressive, however, the main riff is unbeatable, kind of like a 'Day Tripper' unexpectedly gone in the reverse direction midway through. It all amounts to one heck of a silly simplistic listening experience, but it's pretty cool anyway and should never be expected to be taken seriously in the first place.
But in general, I'm just a bit stumped by the album, especially considering they'd soon be going back to the 'evil' direction of the first album. It's an obvious anomaly in the catalog, and by all means, I could easily peg this down as a 'sellout' album. Oh, except 'D.O.A.', of course. They sure didn't sell out with 'D.O.A.'. But here's the rub: they made an obviously commercial smooth album and it ended up forgotten and spat out. All except the only song on which they didn't artistically compromise. Logically speaking, this is an overt demonstration of how true objective artistic value triumphs over time.
Say, reviewing these Bloodrock albums really pushes me forward in terms of dangerous generalizations and metaphysical hypotheses. So how about this one: the blood dripping from the album cover in front of the members is supposed to represent the death agony of the hedonistic-democratic-post-industrial values of contemporary America and the ultimate crash of Western Civilization as a whole. In fact, 'D.O.A.' = 'Death Over America', 'Sable And Pearl' is an obvious hint at the merciless exploitation of the resources of third world countries, 'Lucky In The Morning' is, of course, a concealed ode to the people of the East, and titles like 'Fallin' and 'Dier Not A Lover' speak for themselves. Isn't it time the FBI were investigating Bloodrock members already?
(starling.rinet.ru/music/blood.htm)
01. Lucky In The Morning (05:46)
02. Cheater (06:48)
03. Sable And Pearl (04:56)
04. Fallin' (04:03)
05. Children's Heritage (03:32)
06. Dier Not A Lover (04:08)
07. D.O.A. (08:26)
08. Fancy Space Odyssey (05:10) 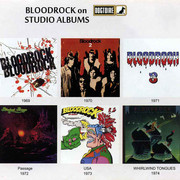 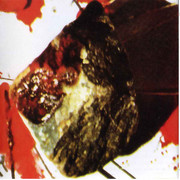 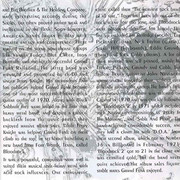