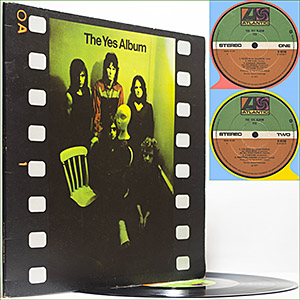 "The Yes Album started a new plane for Yes," Steve Howe said in 2013, "where we were completely original. Not doing other people’s songs, but creating our own music. "When I joined, I said: ‘Isn’t it time Yes did the whole thing?’ They all felt the same."
First released in February 1971, Yes’s third full-lengther “felt like the first real Yes album” according to Jon Anderson.
With Peter Banks having left, Howe came in with a dazzling scope of guitar sonics and styles while the band, skint and fed up of watching other bands they knew break big, jettisoned the stabilisers.
Co-producer and engineer Eddy Offord too played a vital role in their invention of a new post-psychedelia landscape. Like radical sculptors, they curved and warped the structure of their material until it offered resonant revelations in sound.
The trippy trinity of Yours Is No Disgrace, I’ve Seen All Good People and Starship Trooper stand as evergreen Yes masterworks. Your ears enter them through fresh windows and doorways every time, even over four decades later.
Prior to recording the band – getting to know Howe – “got away from it all” in Devon, renting a farmhouse in which they wrote, rehearsed and realised they could break the time-honoured rules of popular music. In the London studio, they then put down the tracks in sections and listened back to producer Eddie Offord’s ingenious assemblages.
The artful eclecticism surprised even its creators. Even though Kaye’s subsequent departure (a Hammond aficionado, he wasn’t keen on emerging technology) and Rick Wakeman’s arrival marked what most believe to be the definitive Yes line-up, it’s a pity this quintet crafted only this one diamond, unique in its sparkle and flow.
It was and is funkier, looser, than their later jewels, while always knowing where it’s going. It’s exploratory, but concise: so much happens, but every second counts. The Yes Album gave the band their first number one (albeit thanks at first to a dubious chart, taken hurriedly from the Oxford Street Virgin store because of a postal strike), and sold a million. 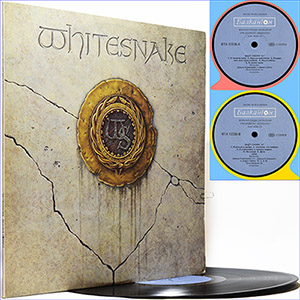 Whitesnake are a hard rock band formed in England in 1978 by David Coverdale, after his departure from his previous band Deep Purple. Their early material has been compared by critics to the blues rock of Deep Purple, but they slowly began moving toward a more commercially accessible rock style. By the turn of the decade, the band's commercial fortunes changed and they released a string of UK top 10 albums, Ready an' Willing (1980), Come an' Get It (1981), Saints & Sinners (1982) and Slide It In (1984), the last of which was their first to chart in the US and is certified 2x platinum.
The band's 1987 self-titled album was their most commercially successful worldwide, and contained two major US hits, "Here I Go Again" and "Is This Love", reaching number one and two on the Billboard Hot 100. The album went 8 times platinum in the US, and the band's success saw them nominated for the 1988 Brit Award for Best British Group. Slip of the Tongue (1989) was also a success, reaching the top 10 in the UK and the US, and received a platinum US certification. The band split up shortly after this release, but had a reunion in 1994, and released a one-off studio album, Restless Heart (1997).
Whitesnake officially reformed in 2002 and have been touring together since, releasing four albums, Good to Be Bad (2008), Forevermore (2011), The Purple Album (2015) and Flesh & Blood (2019). In 2005, Whitesnake were named the 85th greatest hard rock band of all time by VH1. 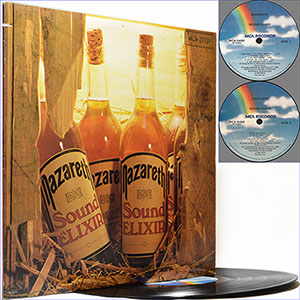 Nazareth formed in December 1968 in Dunfermline, Scotland, from the remaining members of semi-professional local group The Shadettes (formed in 1961) by vocalist Dan McCafferty, guitarist Manny Charlton (ex Mark V and The Red Hawks), bassist Pete Agnew, and drummer Darrell Sweet. They were inspired by The Beatles and The Rolling Stones. Nazareth took their name from Nazareth, Pennsylvania, which is cited in the first line of The Band's classic song "The Weight" ("I pulled into Nazareth, was feelin' about half past dead...").
The band moved to London, England in 1970 and released their eponymous debut album in 1971. After getting some attention with their second album Exercises, released in 1972, Nazareth supported Deep Purple on tour, and issued the Roger Glover-produced Razamanaz, in early 1973. This collection spawned two UK Top Ten hits, "Broken Down Angel" and "Bad Bad Boy". This was followed by Loud 'N' Proud in late 1973, which contained another hit single with a cover of Joni Mitchell's song "This Flight Tonight". Then came another album Rampant, in 1974, that was equally successful although its only single, "Shanghai'd in Shanghai", narrowly missed the British Top 40. A non-album song, again a cover version, this time of Tomorrow's "My White Bicycle", was a UK Top 20 entry in 1975.
Hair of the Dog was released in April 1975 and was produced by Manny Charlton, ending Roger Glover's association with the band. The title track of that album (popularly, though incorrectly, known as "Son of a Bitch" due to its hook lyric) became a staple of 1970s rock radio. The American version of the album included a song originally recorded by The Everly Brothers, the melodic Boudleaux Bryant-penned ballad "Love Hurts", that was released as a hit single in the UK and in the US, where it went platinum. The track became the band's only US Top Ten hit and was also a top 10 hit in nine other countries, reaching number 1 in six of them. The song was on the Norwegian chart for 60 weeks.
In 1979, second guitarist Zal Cleminson was added to the line-up, remaining for two albums, No Mean City and Malice in Wonderland, and contributing numerous compositions. Malice in Wonderland contained the single "Holiday". In 1981, they contributed the song "Crazy (A Suitable Case for Treatment)" to the soundtrack to the film, Heavy Metal.
Various Nazareth line-ups continued to make studio albums and tour throughout the 1980s and 1990s, although their popularity had declined such that some albums no longer received either a UK or a US release. They remained popular in Europe, particularly Germany, where "Dream On" became a hit single. In 1991, Billy Rankin returned to replace Manny Charlton on the No Jive album, remaining with the band until 1994.
A tribute came in 1993 when Guns N' Roses covered Nazareth's "Hair of the Dog" on "The Spaghetti Incident?", consolation after they turned down Axl Rose's request for the group to play at his wedding. Rankin departed again in 1994, but with Jimmy Murrison and keyboard player Ronnie Leahy, Nazareth maintained a live following in Europe and the US.
Nazareth continued touring after Rankin's departure, with Jimmy Murrison and keyboard player Ronnie Leahy. While on tour in 1999, original drummer Darrell Sweet died at age 51 of a heart attack. He was replaced by bassist Pete Agnew's son Lee for later editions of the band.
On 4 August 2006, John Locke, the former keyboardist of the band, died from cancer at the age of 62.
In February 2008, The Newz was released on the Hamburg-based label, Edel Entertainment. The release of the album coincided with Nazareth's fortieth anniversary tour, which started on 25 January in Sweden and visited most of Europe, finished on 4 November 2008 in Norway. A follow up album, Big Dogz, was released on 15 April 2011.
Nazareth announced McCafferty's retirement from the band due to ill health on 28 August 2013, leaving Pete Agnew as the sole remaining original member of the band. On 22 February 2014, it was announced that Scottish singer Linton Osborne was chosen as McCafferty's replacement, with the former singer's blessing. In December 2014, Nazareth announced the cancellation of several shows, and later postponement of their UK tour, due to Osborne contracting a virus that left him unable to perform. In a post on his Facebook page 16 January 2015, Osborne announced his departure from the band.
On 13 February 2015, the band announced that Carl Sentance, formerly of Persian Risk, Geezer Butler Band, and Krokus, was their new lead vocalist.
On 25 June 2019, The New York Times Magazine listed Nazareth among hundreds of artists whose material was reportedly destroyed in the 2008 Universal fire.
www.wikiwand.com/en/Nazareth_(band)