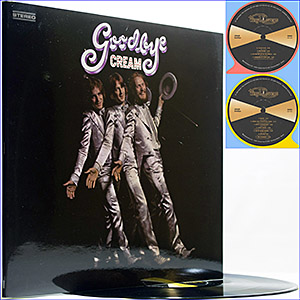 Goodbye (also called Goodbye Cream) is the fourth and final studio album by Cream, with three tracks recorded live, and three recorded in the studio. It was released in Europe by Polydor Records and by Atco Records in the United States, debuting in Billboard on 15 February 1969. It reached number one in the United Kingdom and number two in the US. A single, "Badge", was subsequently released from the album a month later. The album was released after Cream disbanded in November 1968.
Just before Cream's third album, Wheels of Fire, was to be released, the group's manager Robert Stigwood announced that the group were going to disband after a farewell tour and a final concert at the Royal Albert Hall in November. Just before the start of their farewell tour in October 1968, Cream recorded three songs at IBC Studios in London with producer Felix Pappalardi and engineer Damon Lyon-Shaw. The songs "Badge" and "Doing That Scrapyard Thing" featured Eric Clapton using a Leslie speaker, while all three recordings featured keyboard instruments played by either Jack Bruce or Felix Pappalardi. The group started their farewell tour on 4 October 1968 in Oakland, California and 15 days later on 19 October the group performed at The Forum in Los Angeles where the three live recordings on Goodbye were recorded with Felix Pappalardi and engineers Adrian Barber and Bill Halverson. 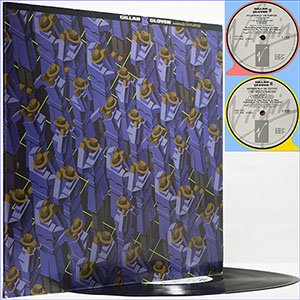 Accidentally on Purpose is an album by Deep Purple members Ian Gillan and Roger Glover, released in February 1988 on Virgin Records. The track "Lonely Avenue" appeared on the soundtrack to Rain Man featuring Dustin Hoffman and Tom Cruise. The track "Telephone Box" reached No. 15 on the US Billboard Mainstream Rock Songs chart. 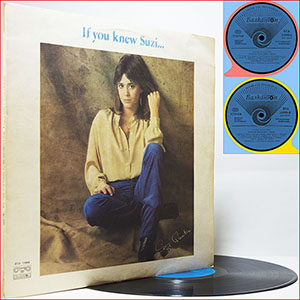 If You Knew Suzi... is the fifth regular studio album by Suzi Quatro, released at the end of 1978, with a 1979 copyright date. By August 2012 this was still Quatro's highest-charting album in the United States (it peaked at number 37 on The Billboard 200). The album also yielded Quatro's biggest US single hit, a duet with Chris Norman named "Stumblin' In" (which reached number 4 in both The Billboard Hot 100 and the Billboard Adult Contemporary charts. It also had an advertising billboard on Sunset Boulevard.
The credits show the album to be a multinational production: tracks were recorded in Cologne (Germany), Paris (France), and Glendale (California). It was then mixed in California and mastered in London to be distributed by a company based in New York City.
Notes:
The US and Canadian pressing of the album omitted the Vanda and Young-penned song "Evie" and included "Stumblin' In" in its replacement. When If You Knew Suzi... was re-released as a "two-fer" with the Suzi ... and Other Four Letter Words album, both "Evie" and "Stumblin' In" were included. 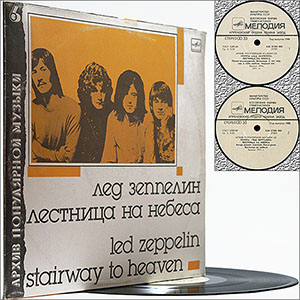 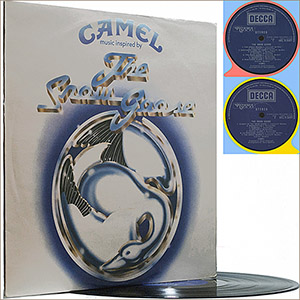 The Snow Goose is the third studio album by the band Camel, released in 1975. The critical success of "The White Rider" suite (based on J. R. R. Tolkien's The Lord of the Rings and appearing on the band's previous 1974 album, Mirage), inspired the group to write more novel-inspired conceptual suites.
The band considered several novels on which to base their next album. For a time they settled on Siddhartha, by Hermann Hesse, and some songs were written before the idea was abandoned in favour of Paul Gallico's novella The Snow Goose. The album's name, originally The Snow Goose was altered to Music Inspired by The Snow Goose to accommodate legal protests by Paul Gallico. The album was originally due to feature lyrics based on Gallico's text, but this was abandoned due to the copyright objections. The music was mostly written over a fortnight in a cottage in Devon, England. 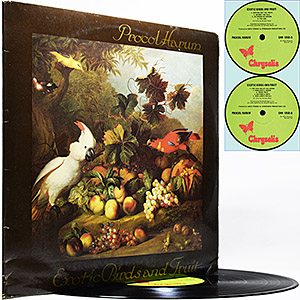 "Exotic Birds and Fruit" met with a good critical reception but only rose to No. 86 on the Billboard album charts. In Denmark, it peaked at #9 upon release, and nearly a year later in early 1975 it re-entered the Top 20 peaking at #19. The album was preceded by the single release of the opening track "Nothing But the Truth" back with the single only B-side track "Drunk Again".

Exotic Birds and Fruit is the seventh full-length studio album by British progressive rock band Procol Harum. The cover artwork for the album is by Jakob Bogdani, a noted Hungarian artist whose paintings centred on exotic birds and fruit.
Collaborating again with producer Chris Thomas, Procol Harum the band recorded the album at George Martin's Air London Studios in London. According to singer/songwriter/piano player and band leader Gary Brooker the album was recorded in reaction to the two preceding albums which used extensive orchestration. Brooker stated "We made the live album with an orchestra. We'd then taken the orchestra into the studio for 'Grand Hotel'...we'd had enough of orchestras".
This back to basics approach worked well given that there were regular power cuts during the power struggle between Edward Heath's government and the UK unions. The band used an emergency generator during the blackouts which forced three-day working weeks during the so-called "winter of discontent" of 1973–74.
The album features the song "Butterfly Boys" written about the founders of the band's record label at the time Chrysalis. The band were unhappy with the terms of their contract and expressed that frustration in song.
"Exotic Birds and Fruit" met with a good critical reception but only rose to No. 86 on the Billboard album charts. In Denmark, it peaked at #9 upon release, and nearly a year later in early 1975 it re-entered the Top 20 peaking at #19. The album was preceded by the single release of the opening track "Nothing But the Truth" back with the single only B-side track "Drunk Again". 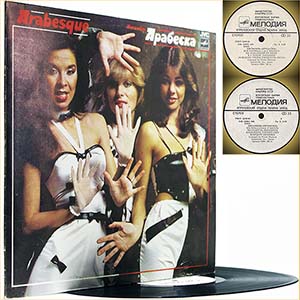 Arabesque was an all-girl trio formed at the height of the European disco era in 1977 in Frankfurt, Germany. The group's changing lineup worked with the German composer Jean Frankfurter (Erich Lie?mann) and became especially popular in Japan and the USSR.
In 1975, children's music singer Mary Ann Nagel proposed a girl group to producer Wolfgang Mewes, who accepted. Two additional members were recruited through a song contest. An Englishwoman (Karen Ann Tepperis), a German-Mexican (Michaela Rose), and a German (Mary Ann Nagel) comprised the initial group.
After the first album, the band lineup changed by keeping only the original member Michaela Rose, while replacing the two other girls, Karen Ann Tepperis and Mary Ann Nagel, with new members Jasmin Vetter and Heike Rimbeau, respectively. Nagel was replaced due to her becoming tired of the long daily commute from Karlsruhe to Frankfurt am Main, where the group was based. Tepperis was replaced due to the fact that she was pregnant and could not go on tour. The surprising overnight success of Hello Mr. Monkey in Japan prompted the producers to schedule an immediate tour to Japan. The duration of Heike Rimbeau in the group was also short-lived; due to her pregnancy in 1978, she was briefly substituted with Elke Bruckheimer. This German country singer appeared only in a few live performances during the year 1979. However, shortly afterward, she too was replaced by Sandra Lauer. Lauer had previously attended the Young Star Music contest in 1975, where she achieved a record deal and released the song "Andy mein Freund" ("My Friend Andy").
In 1979, at age 17, Lauer was invited to become the lead singer of Arabesque. The trio (Lauer, Vetter, Rose) would remain in this lineup from 1979 until their split in 1984.