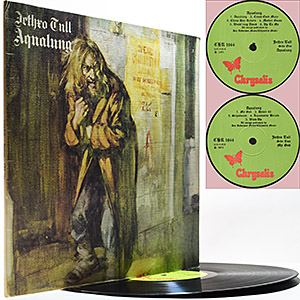 Aqualung is the fourth studio album by the rock band Jethro Tull, released in 1971. It is regarded, despite the band's disagreement, as a concept album featuring a central theme of "the distinction between religion and God". The album's "dour musings on faith and religion" have marked it as "one of the most cerebral albums ever to reach millions of rock listeners". Aqualung's success signalled a turning point in the band's career, which went on to become a major radio and touring act.
Aqualung has sold more than seven million units worldwide, and is thus Jethro Tull's best-selling album. The album was generally well-received critically and has been included on several music magazine best-of lists. The album spawned two singles, "Hymn 43" and "Locomotive Breath". 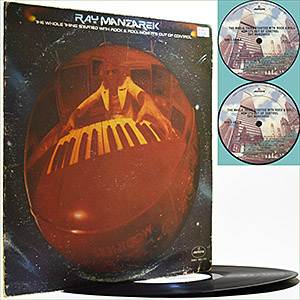 Ray Manczarek (February 12, 1939 – May 20, 2013) was an American musician, singer, producer, film director, and author, best known as a member of The Doors from 1965 to 1973, which he co-founded with singer and lyricist Jim Morrison. Manzarek was notable for performing on a keyboard bass during many live shows and some recordings, taking on a role usually filled by a bass guitar player.
Manzarek recorded on every track of all eight Doors studio albums, and was inducted into the Rock and Roll Hall of Fame in 1993. He was a co-founding member of Nite City from 1977 to 1978, and of Manzarek–Krieger from 2001 until his death in 2013. USA Today defined him as "one of the best keyboardists ever." 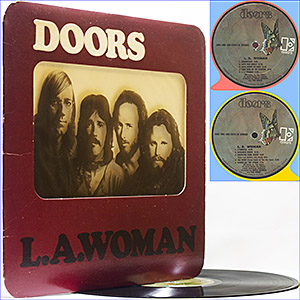 L.A. Woman is the sixth studio album by the American rock band the Doors, released on April 19, 1971, on Elektra Records. It is the last to feature lead singer, Jim Morrison, who died three months after the album's release.
"Love Her Madly" was released as a single in March 1971, preceding the album's release, and reached the Top 20 in the Billboard Hot 100. Upon release, the album peaked at number nine on the Billboard 200 and reached number 28 on the UK Albums Charts. The track "Riders on the Storm" also achieved chart success in the US and UK.
Critics Richie Unterberger and David Quantick have both called L.A. Woman one of the Doors' best albums, citing Morrison's vocal performance, and the band's stripped-down return to their blues rock roots. 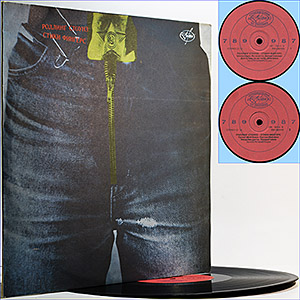 Sticky Fingers is the ninth British and eleventh American studio album by the English rock band The Rolling Stones, released in April 1971.
Sticky Fingers is considered one of the Rolling Stones' best albums. It achieved triple platinum certification in the US, with songs such as the chart-topping "Brown Sugar," the country ballad "Dead Flowers"[3][4], "Wild Horses," "Can't You Hear Me Knocking," and "Moonlight Mile". The original cover artwork, conceived by Andy Warhol and photographed and designed by members of his art collective, The Factory, was highly innovative, showing a sexually suggestive picture of a man in tight jeans complete with a fully working zipper that opened to reveal a pair of underwear. Owing to the damage caused by the zipper to the vinyl disc, and the expense in producing the unusual cover, later re-issues featured just the outer photograph of the jeans.
(Wikipedia)
Charts: Australia, Canada, Denmark, Norway, Spain, Sweden, West Germany, UK - number 1. France - 3, Italy - 5, Japan - 9. 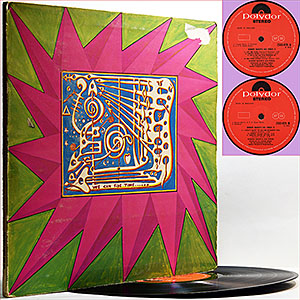 The band formed in late 1969 upon the disbandment of Blind Faith. The original lineup consisted of Ginger Baker on drums, Steve Winwood on organ and vocals, Ric Grech on violin and bass, Jeanette Jacobs on vocals, Denny Laine on guitar and vocals, Phil Seamen on drums, Alan White on drums, Chris Wood on tenor sax and flute, Graham Bond on alto sax, Harold McNair on tenor sax and flute, and Remi Kabaka on percussion. Their first live shows, at Birmingham Town Hall in 1969[1] and the Royal Albert Hall, in 1970, also included Eleanor Barooshian (both Jacobs and Barooshian were former members of girl group The Cake).
The band released two albums, both in 1970: Ginger Baker's Air Force and Ginger Baker's Air Force 2. The second album involved substantially different personnel from the first, with Ginger Baker and Graham Bond being the primary constants between albums.
Ginger Baker's Air Force also played a set at Wembley Stadium on 19 April 1970, during the start of the World Cup Rally, which went from London to Mexico City.
Ginger Baker's Air Force 2 was the second and final album by Ginger Baker's Air Force, released in 1970. In Germany, Australia and New Zealand it was released with a different track listing, including previously unreleased songs.
This album was recorded in a studio, unlike the previous one, featuring a different lineup of the band, with Denny Laine, Harold McNair, Aliki Ashman, and Ric Grech as "Additional personnel". Graham Bond took lead vocal duties along with Ginger Baker, Diane Stewart and Catherine James.
The album cover was designed left-handed; i.e. with the front cover printed on what traditionally would be considered the back and vice versa.
Recorded: May & October 1970 (Trident Studios, London) – September 1970 (Olympic Studios, London)
Producer: Ginger Baker, Rick Grech, Denny Laine & Graham Bond
(Wikipedia)