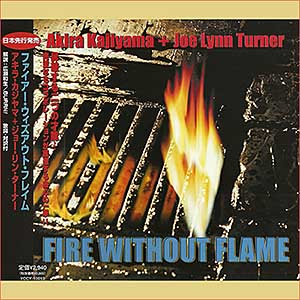 Year: 7 December 2005 (Japan), May 2006 (Europe), (CD December 7, 2005)
Label: Yamaha Music (Japan), YCCY-10013
Style: Hard Rock, Rock
Country: Yamaguchi, Japan / New Jersey, U.S.
Time: 53:04
Format: Flac Tracks 16/44,1 kHz
Size: 405 Mb
Guitarist Akira Kajiyama and singer Joe Lynn Turner have composed, played, and recorded music together several times before now. Most of these occasions have been to make Lynn Turner solo albums like Under Cover 2 (’99), Holy Man (’00), and Slam (’01). Kajiyama also played with Lynn Turner on the HTP live album Live In Tokyo (‘02).
Fire Without Flame could very well have been a new solo album from Joe. It sounds like one. However, this time around the release is just as much Akira Kajiyama’s child. Kajiyama has, as well as sharing the song writing task, played all the instruments on the album plus was in charge of the production.
Having said this; in a sense this album could have been promoted as Kajiyama’s solo album with Lynn Turner as a hired singer. However, by putting both their names on the cover, they may very well sell a few more copies. Joe Lynn Turner has, over the years, profited a lot from whomever he’s been working with, rather than from his own name alone. Face it, as a member of Rainbow, Deep Purple, or Yngwie Malmsteen’s band, he never had the hottest name in any of the line-ups.
However, Fire Without Flame is the first heard from Joe Lynn Turner since the release of last year’s critically acclaimed (deservingly so) solo release, The Usual Suspects. Unfortunately, one has to admit that this new release doesn’t add anything new to his more than 30-year long career as a singer. By all means, the songs are all very well-performed, Joe can sing, and the multi-instrumentalist Akira sure can play. Still, it all sounds like a whole lot of what you’ve heard before.
Despite this, some variation is provided throughout the album. Some Blues and Metal material, some ballads … but most of all, you get Melodic Hard Rock that’s a little bit too stuck in the past. Especially the keyboard arrangements sound from time to time embarrisingly 80ish, and the lyrics are a long row of cliches.
Track three, "Survival,” sounds a lot like a leftover from Blackmore’s Stranger In Us All sessions. How uninteresting isn’t that? Track four, "Heart Against Heart,” sounds uncomfortably close to an attempt on making another "Love Conquers All” (Deep Purple – Slaves And Masters). "End Of The Line” is one of the album’s strongest moments, strong riff, chorus, bridge, and all, but could just as well have been on any of the two HTP studio albums.
Joe Lynn Turner and Akira Kajiyama sound very motivated, though, and Fire Without Flame might be a necessary stepping stone for the both of them to point out their future paths. At least this should be an important move for Akira; to have his own name on the cover. His CV will be strengthened from this, and for Lynn Turner -– he has once again proved that a partnership with him will mean a spotlight shared.
Highlights: "End Of The Line," "Bad Feeling," and "License To Kill."
(metalexpressradio.com/2015/09/06/akira-kajiyama-joe-lynn-turner-fire-without-flame) (September 6, 2015)
01. One Day Away (04:08)
02. Fire Without Flame (04:18)
03. Carnival Of Souls (03:43)
04. Heart Against Herart (06:57)
05. End Of The Line (04:44)
06. Forever Changed (05:56)
07. Bad Feeling (04:58)
08. Looking For Trouble (04:27)
09. Down And Dirty (04:34)
10. License To Kill (04:49)
11. Slow Burn (04:26)