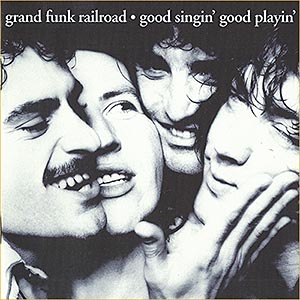 Year: August 9, 1976 (CD 1999)
Label: Hip-O Records (U.S.), HIPD-40144
Style: Rock, Hard Rock, Pop
Country: Flint, Michigan, U.S.
Time: 51:12
Format: Flac Tracks 16/44,1 kHz
Size: 341 Mb
On Second Thought: Grand Funk Railroad – Good Singin’ Good Playin’ (1976)
Rising from the ashes of Terry Knight and the Pack, a Flint, Michigan-based band that cut a string of singles and two full-length albums worth hunting down, Grand Funk Railroad was one of the hottest acts of the early 1970s. Despite the grim reality most critics despised the band, for reasons I could never personally fathom, the kids loved them and bought cartons and cartons of their records.
Weaned on a delicious diet of James Brown, Motown, the Rolling Stones and the Animals, Grand Funk Railroad added a bucket of bulk to these influences, resulting in a powerful melding of vanilla soul and hard rocking bravado. Along with Deep Purple, Black Sabbath and Led Zeppelin, the band has often been cited heavy metal pioneers.
Grand Funk Railroad’s mission was to play super loud, high energy rock that generated a community feeling. Indeed, their music was performed at deafening volumes and their songs encouraged people to let loose and have fun. Some of their tunes also addressed social concerns of the day.
Fronted by the muscular vocals and grinding guitar aerobics of Mark Farner, the band’s sound was comparably robust. Mel Schacher’s driving bass lines crashing into Don Brewer’s thunderous drum fills were joyous noise to many an ear. Come 1972, keyboardist Craig Frost joined Grand Funk Railroad on a permanent basis, providing their fare with a bit of extra color and depth.
Originally issued in April of 1976, and reissued by Hip-O Records in 1999, Good Singin’ Good Playin’ was the band’s final studio album of the decade. Grand Funk Railroad actually dismantled shortly before the disc was released and would not record together again until staging a brief reunion five years later.
Produced by Frank Zappa, Good Singin’ Good Playin’ contains all the expected accessories associated with the band’s music, from the slaving rhythms to the chest-beating choruses to the heated jams. Not quite as wild and reckless as they were in the distant past, Grand Funk Railroad had already adopted a sleeker and tighter pose prior to the birth of Good Singin’ Good Playin,’ but still rocked like an earthquake.
Although nothing on the album equals the immediate intensity of classics such as “I’m Your Captain,” “Mean Mistreater,” “I Can Feel Him In The Morning,” “Footstomping Music,” “Heartbreaker,” “Take Me,” “Bad Time,” “We’re An American Band,” “Shinin’ On” or “Some Kind Of Wonderful,” the tunes are smartly executed and the melodies are seductive enough for the brain to retain.
What’s especially fascinating about Good Singin’ Good Playin’ is that a lot of the songs carry a pop metal bent (think Sammy Hagar, Loverboy and so forth) and you have to remember the record was made before the term was even officially coined. The strongest offering on the disc is perhaps the big and bouncy “Just Can’t Wait” that sort of recalls a non-countrified version of the Doobie Brothers.
Funky, soulful and soaking with sweat, “Can You Do It” is a cool old-school styled dance number, while “Out To Get You,” “Goin’ For The Pastor” and “1976” are fueled by brash and rash grooves cast of a genuine rock and roll spirit.
Not the best Grand Funk Railroad album in the box, but definitely overlooked and underrated, Good Singin’ Good Playin’ certainly lives up to is title.
(somethingelsereviews.com/2012/11/28/on-second-thought-grand-funk-railroad-good-singin-good-playin-1976/) (November 28, 2012 by Beverly Paterson)
01. Just Couldn't Wait (03:28)
02. Can You Do It (03:17)
03. Pass It Around (04:59)
04. Don't Let 'Em Take Your Gun (03:40)
05. Miss My Baby (07:20)
06. Big Buns (00:30)
07. Out To Get You (04:44)
08. Crossfire (04:19)
09. 1976 (04:20)
10. Release Your Love (03:52)
11. Goin' For The Pastor (05:24)
12. Rubberneck (previously unreleased) (bonus)* (05:15)