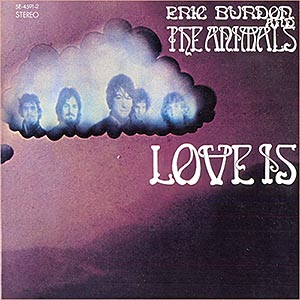 Year: December 1968 (CD 2013)
Label: Polydor Records (Japan), UICY-75625, SE-4591-2
Style: British Rhythm and Blues, Rock
Country: Newcastle, England (11 May 1941)
Time: 74:30
Format: Flac Tracks 16/44,1 kHz
Size: 433 Mb
Burdon & company's "Love Is . . . " is probably one of their most polarizing albums. On the one hand, it is probably their slickest production and most coherent "concept album" statement -- on the other hand it is a ridiculously overproduced piece of hippy silliness with some surprisingly sloppy moments in the playing and singing. I like it for both reasons!
"Love Is . . . " is a double album with 8 tracks, nearly all of which are covers. The "New Animals" who play on the LP include "Zoot Money" and Andy Summers, later of The Police (these two had previously recorded an interesting psychedelic single together as Dantalion's Chariot, more on that below.)
Track 1 is "River Deep, Mountain High" the Phil Spector tune which was a hit for Ike & Tina. It kicks things off in a rousing fashion, Burdon doing his best white-man-soul vocalizing plus groovy wish-I-was-Black adlibs like "I love you baby like a flower loves the spring / I love you baby like Aretha Franklin needs to sing." Supremely over-arranged in high sixties style, the song climaxes with a wonderful psych-out bridge section where a platoon of acid munchkins chant "tina tina tina tina-nee-na-na" (as in Tina Turner of course).
Track 2 is a Sly Stone cover, "I'm An Animal", chosen for obvious reasons (Burdon is "an Animal", get it?) IMHO, one of the least interesting Sly tunes which gains little by this remake, the only twist being a floaty electronic piano & gentle wah guitar extended bridge with Eric jiving something about "creation! creature! animalism! brute!"
Track 3 is one of the originals - "I'm Dying, Or Am I?" with Zoot doing the call-and-response thing with Eric. More high sixties subCream wah guitar dueling with psuedo-spanish acoustic guitars and lots keyboard overdubbage and some extremely out-of-tune background harmonies, plus ye oldest 60's trick in the book: verses in 4/4 time and choruses in 3/4 for that carnival effect. "God knows I'm dying / my body can't keep up with my mind."
Track 4 is a bonafide kitsch classic that would fit right in with William Shatner's rock'n'roll massacres - Johnny Cash's "Ring of Fire" is given the all-out syke-ee-delick treatment. Martial snare rolls, superquiet to superloud dynamics-via-overdubs, unnecessary acid guitar licks, the MOST out-of tune (and echo-drenched) harmonizing on an album that is chock full of tuneless harmonizing (all the Animals are credited with vocals - bless Eric for his democratic leanings in this respect - how punk!) Plus Eric gives a wonderfully overdramatic reading of what are essentially very corny lyrics. He goes back and forth between a hoarse whisper during the verses and a full-throated roar on the chorus. Verdict: Hilarious!
Track 5 is nearly as wonderful - Traffic's "Coloured Rain" extended to nearly ten minutes. Where the original was light and hippy-dippy, Eric's reading is again hilariously over-serious. Extended grooovy raga guitar solo in the middle complete with riffing horn section, and more of that outasite, outatune backup harmonizing (is all that echo supposed to hide whoever it is that's always a little flat??)
Track 6 is "Too Love Somebody" by the Gibbs, here sounding a bit like Vanilla Fudge (slow with droney organ.) Points off for hiring a blackgirl soulchorus - I dig it more when the guys in the band sing!
Track 7 is a ten minute blues opus "As The Years Go Passing By" - lougey piano jazz plus sub-Hendrix acid blues guitar with Eric at his gauche best/worst, sing-speaking in a ridiculous "black accent."
The climactic two-part 17-minute-plus monster that took up all of side 4 of the original LP is comprised of a medley of covers: first, "Gemini" originally by Quatermass - Eric and Zoot call-and-response again, the lyrics describing the contradictory nature of guess which zodiac sign: "I am black and I am white" etc. Highlight is the overblown (even by the standards of this record) bridge where Eric uses the duality of stereo to schizo-whisper stuff to himself like "there is only one side" - "no there are two sides" - back and forth from left & right speakers. Eventually it transitions into the poppier "The Madman" (a remake of "The Madman Running Through The Fields", the aforementioned Dantalion's Chariot single), which is about how the "straights" are like, crazy, man, and features some cool backwards cymbals and a delightful Barrett-Floydish bridge: "isn't that the madman running through the fields? / isn't that the madman, wonder how he feels?"
This album is both a classic of the high-sixties groovy style and a hilariously dated campy relic right down to the silly photomontage cover art (the band in negative, giant size towering over the grand canyon with an oversize moon in the background).
(https://www.headheritage.co.uk/unsung/review/726/) (Reviewed by Dog 3000, 06/02/2003ce)
01. River Deep, Mountain High (07:25)
02. I'm An Animal (05:37)
03. I'm Dying, Or Am I? (04:30)
04. Ring Of Fire (04:53)
05. Coloured Rain (09:41)
06. To Love Somebody (06:57)
07. As The Years Go Passing By (10:22)
08. Gemini (11:54)
09. The Madman (Running Through The Fields) (05:24)
10. River Deep, Mountain High (Single Version) / Bonus Track (07:42)