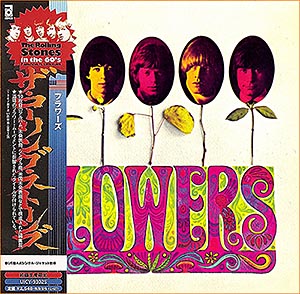 Year: 26 June 1967 (CD 2006)
Label: ABKCO, Universal Music (Japan), UICY-93025
Style: Classic Rock, Rock, British Rhythm and Blues
Country: United Kingdom
Time: 37:20
Format: Flac Tracks 16/44,1 kHz
Size: 214 Mb
Flowers is the second compilation album by the Rolling Stones, released in the summer of 1967. The group recorded the songs at various studios dating back to 1965. Three of the songs had never been released: "My Girl", "Ride On, Baby" and "Sittin' on a Fence", the first of which was recorded in May 1965 during the sessions for "Satisfaction", and the other two of which were recorded in December 1965 during the first lot of Aftermath sessions. The rest of the album tracks either appeared as singles or had been omitted from the American versions of Aftermath and Between the Buttons.
The title refers to the album's cover, with flower stems underneath the portrait of each of the band members. Bassist Bill Wyman claims that Mick Jagger and Keith Richards deliberately arranged the stem of Brian Jones's flower so that it had no leaves, as a prank.[citation needed] The portraits are from the British version of Aftermath. Flowers reached number three in the US during the late summer of 1967 and was certified gold.
(en.wikipedia.org/wiki/Flowers_(Rolling_Stones_album)
Here’s the original track listing for Flowers:
1. “Ruby Tuesday” -- A great song, and the most 1967-sounding (complete with double-bass and recorder)...because it had already been released in 1967, on Between The Buttons. Rip-off #1
2. “Have You Seen Your Mother, Baby, Standing In The Shadow?” -- The last single from 1966, mostly forgotten now, but it’s a winner: A total electric freak-out, awash in feedback, with chaotic mariachi-style horns going crazy in the background.
3. “Let’s Spend The Night Together” -- Again, great song. Again, already on Between The Buttons. Rip-off #2.
4. “Lady Jane” -- Already on Aftermath. Inclusion here a total mystery. Rip-off #3.
5. “Out Of Time” -- Formerly only available on the British version of Aftermath. A sibling to “Under My Thumb,” utilizing the same lead instruments: the marimba (a type of African xylophone), and fuzz bass, and with the same quasi-misogynistic lyrical themes.
6. “My Girl” -- Previously unreleased, and with good reason. It’s terrible. It’s the oldest track here, dating from the May 1965 sessions that also produced “Satisfaction.” Whoever thought it would be a kick for them to do a half-assed run-through of this Temptations classic should be boiled in patchouli oil. I suspect it was their loopy “producer”/manager Andrew Loog Oldham (fired around the time of Flowers' release), because it was he that supervised the hasty overdubbing of a string section in the fall of 1966. It still wasn’t deemed releasable, until London Records, nosing around in the vaults, decided to put it on Flowers. Even though it had never been heard before, I’m going to call this rip-off #4, because no one should have heard it. Ever.
7. “Backstreet Girl” -- From the British version of Between The Buttons, and a highlight of that album, which lacked the one-two punch of “Ruby Tuesday” and “Let’s Spend The Night Together.” Those were only a single in Britain (confused yet?). Gentle accordion flourishes give this a Parisian atmosphere.
8. “Please Go Home” -- Also from the U.K. Between The Buttons. Not much substance here, but it certainly sounds cool -- a Bo Diddley-style guitar shuffle drenched in swirling echo.
9. “Mother’s Little Helper” -- The opening track of the British Aftermath. Even though it had the droning Indian instrumentation found on psychedelia of a slightly later era, its propulsive amphetamine rush and clattering percussion meant it was anything but mellow.
10. “Take It Or Leave It” -- Buried on Side Two of the British Aftermath, it was a universal consensus that this flat, melody-free acoustic lament was the weakest track on that otherwise fine album. Naturally, it was given top priority for Flowers over other more worthy choices. I say, rip-off #5.
11. “Ride On, Baby” -- Previously unreleased track from the Aftermath sessions. Exotic instrumentation included a harpsichord and Japanese koto, both played by multi-instrumentalist Brian Jones, who by the time of Flowers’ release, was already being edged out of the band due to his druggy unreliability. Conspiracy theorists after the fact noticed that Brain’s flower stem on the cover was missing its leaves.
12. “Sittin’ On A Fence” -- Another previously unreleased Aftermath outtake, this dark folk tune with delicate finger-picked guitar work has always been one of my favorite early Stones songs.
01. Rolling Stones, Ruby Tuesday (03:17)
02. Have You Seen Your Mother, Baby, Standing in the Shadow? (02:35)
03. Let's Spend the Night Together (03:38)
04. Lady Jane (03:08)
05. Out of Time (03:42)
06. My Girl (02:39)
07. Backstreet Girl (03:26)
08. Please Go Home (03:19)
09. Mother's Little Helper (02:47)
10. Take It or Leave It (02:47)
11. Ride On, Baby (02:53)
12. Sittin' on a Fence (03:02)