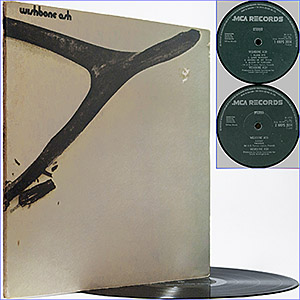 Wishbone Ash is the first studio album by Wishbone Ash. The band's debut album became a reality when they were opening for Deep Purple in early 1970. Deep Purple guitarist Ritchie Blackmore was jamming during the band's soundcheck when Wishbone guitarist Andy Powell boldly plugged in and began jamming with Blackmore.
After the show, Blackmore recommended that MCA Records sign the band. Deep Purple producer Derek Lawrence produced this album, which features elements of blues, Jazz, progressive rock, and psychedelic improvisation. The album was a success and Wishbone Ash would soon become one of the most popular rock bands of the early 1970s. (Wikipedia)